Proposals with one step and up to ten have been received, the average number of steps per proposal being three, with a wide distribution showing for instance 102, 53 and 25 proposals with 3, 4 and 5 steps, respectively.

From the overall 231 proposals approved to date, 151 have been concluded, the rest being in process or at the scheduling phase.

Taking into account the 11 calls resolved since the onset of NFFA the total number of users involved in requested proposals has been 976 (approx. 30% female), while 645 were the beneficiaries of the accepted proposals; a major fraction of them travelled to the providers’ premises. The average of users per proposal is of 2.8. In the second half of calls, we have had a higher involvement of ‘trained’ users resubmitting improved proposals (46) or submitting continuation projects (39). The ratio of new users vs old users is going to be stable, being in the last six calls around 1 to 1 indicating we have both satisfied users that want to repeat the NFFA experience and we are still luring new users into our system.

Adding up the 11 calls processed up to now, 44 countries have participated in NFFA: 21 EU member states (totalling 245 proposals), 8 Associated Countries (totalling 36 proposals) and 15 non-EU countries (totalling 74 proposals). The presence of non-EU or AC countries has increased greatly, from the early 15% to 25% (15% non-EU, 10% AC) of the proposals received, reinforcing the worldwide nature of NFFA. In terms of UoA (Unit of Access), the amount of them granted to non-EU represents 15% of the total granted in the first 11 calls, which is close to, but below, the maximum (20%) allotted for such countries.

Italy, Germany, France, UK and Spain have been the five countries requesting more proposals but their relative weight is decreasing from 53% of the requested proposals in the first half of calls, to 44% in the second half. India and Russia have been the most active non-EU countries, at a level very close SPAIN, for instance. It is proper to note that more than 80% of the proposals from India are asking access to Large Scale Facilities, while for Russia such a percentage is less than 25%. Although the difference of overall success rate between proposals led by non-EU countries and those led by EU/AC countries is diminishing during the second half period, such a differential is still above 20 points (46% vs 70%).

With regard to the installations offer coverage, the UoA distribution analysis has been performed and shown in the next figure, taking into account the data of the 355 proposals received up to now. 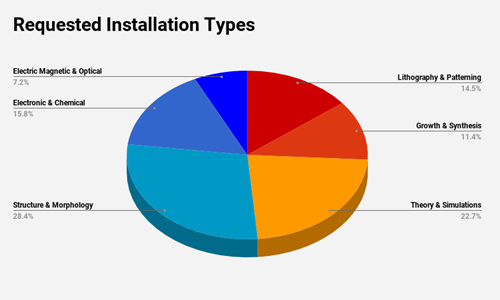 The Characterization block is the most demanded (51%) in these eleven calls, which is not surprising since those techniques account for 59% of the catalogue offer. In any case, taking into account the three fold splitting of the Characterization block (WP5), the six installations are more or less equally demanded, the only exceptions being Structural and Morphological characterization, which exceed the average, and Magnetic, Optical and Electric characterization, which is below it. It must be considered that the total UoA originally offered were not evenly distributed among the different installation types, but split as follows: Lithography (14%), Growth (18.5%), Theory (14.5%), SM Charact (30%), EC Charact (10%), ME Charact (13%).

When considering the assigned UoA after feasibility and scientific evaluation, the situation does not change much, with Theory & Simulation faring a bit better at the expense of the Characterization block.

Out the 355 proposals received, 113 (32%) asked for LSF techniques. Out of those 113 proposals, 67 were approved. The corresponding success rate of 59% of LSF containing proposals is very similar to the one of all proposals (65%). The success rate and percentage of LSF proposals have increased in time, in accordance to the spirit of NFFA. In terms of UoA, 365 of the assigned UoA, 12%, corresponded to LSF techniques.

Out of the 355 proposals received 35 (10%) had an industrial imprint: were either submitted by SME (20) and large companies (2) or by PPPs (6) and academia users acting as an industry proxy (7). The approved proposals are 23 in total, i.e. a 66% success rate, comparable with the total success rate of all proposals. In terms of UoA, 400 were requested and 284 assigned, which both represent 9% of the total requested and assigned UoA. The success rate in industrial oriented UoA has been 71%, a little above the total average of the period (65%). The industry proposals tend to be leaner with an average 10-13 UoA per proposal (compared to the total average of 16-17). No approved proposal for SME made use of the two-techniques waiver lately introduced in this period; there was just one request but it was deemed not feasible.

The analysis of the scientific distribution of the proposals received is shown in the next figure. 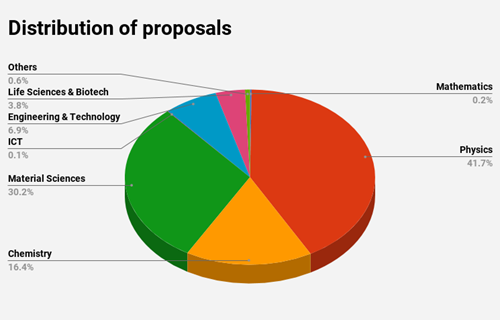 It must be taken with caution since the users were asked to declare which ERC sectors their proposal fitted better (several per proposal), and then they have been aggregated and assigned to the disciplines in the legend.

Mathematics, Physics, Chemistry, Material Science, Information and Communication Technology, Engineering & Technology, Universe, and Earth System Sciences (PE) were the most important of the domains covered. In particular, Condensed Matter Physics (PE3), Physical and Analytical Chemical Sciences (PE4) and Materials and Synthesis (PE5) covered nearly 83% of the requested proposals. On the other hand, the techniques offered by NFFA seem to better serve those purposes than life sciences ones. This may be the reason why only a few proposals in that domain were received: only 3.8% of the requested proposals were assigned to Life Sciences & Biotech (LS). As an anecdote, a few proposals were received in the Social Science and Humanities (SH) domain, namely in the subcategories of Environment, Space and Population (SH3) and Study of the Human Past (SH6), but none of them managed to go through the evaluation.

The materials systems that users were interested in encompassed different types of nano-objects or 2D materials, but also thin and thick films.

As it can be seen there is a huge variety in material options, but it is worth mentioning a significant interest in novel photoresists materials for advanced lithography, perovskites and 2D materials follow. It must be said that only a fraction of those materials were synthesised at NFFA facilities: most of them were provided by the users themselves and then patterned, analysed and characterised at NFFA premises.

The applications these materials were investigated for were quite varied as well, from fundamental phenomena, energy related applications, advanced devices, processing and equipment:

As it can be seen, the applications range is quite varied. In any case, the more significant concentration of projects occurred in high-resolution lithography applications and photovoltaics applications.

In order to improve the submission and access procedures, the opinion of users and providers have been tracked with respect to different organizational issues as well as to the experiments performance.

Users are asked to fill in a satisfaction questionnaire after their access have been performed, they  are asked to rate aspects such as the web-based tools and single entry procedures for proposal making, as well as pre-access / during-access / post-access support, and technical reliability, among others.  The overall satisfactory answers are the common trend of NFFA users experience, the positive rates ranged from 98% to 100% depending on the issues, improving results of the first period (93%-100%). The majority of those positive answers rated their experience as excellent, from 71% to 97%. Some of the comments of the users regarding administrative issues were taken into account to improve the submission procedure.

Here follow a statistic summary of the satisfaction degree to the different aspects covered in the questionnaire:

A questionnaire was also devised for the providers to have an inside satisfaction rating. A review of the answers collected so far points to the following facts with respect user-provider interaction: