Advanced synchrotron radiation spectroscopy at the IOM-CNR laboratory in Trieste helped to gain insight into the origins of phase transitions in Cu and Ni doped TiSe₂ dichalcogenide. 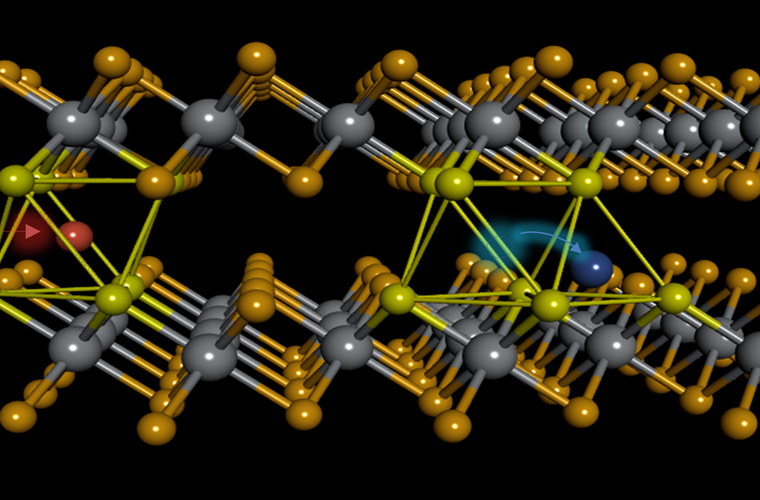 Transition of Ni atom from octahedral to tetrahedral site by intercalation of Cu in TiSe2. Credits: I. Pis, IOM-CNR (Italy)

Transition metal dichalcogenides (TMDC) represent a family of materials typically in the form of MX2 where M is the transition metal and X is the chalcogen (S, Se, Te). Most TMDC bulk crystals are layered solids with strong bonding within the plane but weak interlayer bonding. The ability to tune the chemistry by choosing a unique combination of transition metals, chalcogen and dopant atoms along with controlling their properties by phase engineering allows realizing new functionalities with applications in semiconductor and data storage devices, spintronics, sensors, or in catalysis. Dopant atoms may intercalate between layers and appropriate dopant selection and concentration can improve the performance of TMDCs. On the other hand, an improper doping might have unwanted effects. It is therefore desirable to determine correlations between TMDC phase changes and the amount and nature of the intercalated atoms. Understanding the principles and mechanisms yielding the phases with desired or undesired properties is an important prerequisite to engineer materials with tailored functionalities.

While the effect of the intercalation of single metals into TMDCs is well understood nowadays, little is known about the compounds intercalated with several different metals. The team around Alexander Titov of the Institute of Metal Physics in Yekaterinburg (Russia) has been able to synthesize couple of new compounds of this peculiar class of TMDCs. “The transition from mono to poly-intercalation is like to watching colour TV after black-and-white one. Particularly interesting seems to be Cu and Ni co-intercalated TiSe2.” explains Alexander Titov. It is known that, in single metal intercalated TiSe2, Cu and Ni atoms occupy octahedral sites and hybridize with Ti atoms of the host lattice, while tetrahedral sites are energetically unstable. But which sites will be occupied if we introduce both Cu and Ni atoms simultaneously? Surprisingly, the researchers have discovered that introduction of Cu into Ni-intercalated (Ni)TiSe2 results in the displacement of the Ni atoms from octahedral to tetrahedral sites, even at room temperature. Why is this happening? What is at the origin of this phase transition? To answer these questions, the scientific team has turned to NFFA-EU infrastructures which offer advanced spectroscopic characterization of the electronic structure of solid state materials.

“These results will have important implications for predicting the properties of similar bi-intercalated layered materials,”
– explains Igor Píš of IOM-CNR.

The electronic structure investigations were performed by photoemission and X-ray absorption spectroscopy at the BACH beamline of IOM-CNR developed in collaboration with synchrotron Elettra in Trieste (Italy). The results indicate that the transition of Ni atoms originates in altered electronic structure induced by charge transfer from Cu atoms. It seems that these changes make the hybridization between Ni and Se atoms (tetrahedral sites) more favourable than between Ni and Ti atoms (octahedral sites). Moreover, the interaction between the Ni and Cu dopants is not direct but mediated by the host lattice. “These results will have important implications for predicting the properties of similar bi-intercalated layered materials,” explains Igor Píš of IOM-CNR. Other intriguing point is that the intercalation of Cu atoms and subsequent redistribution of Ni atoms is accompanied by negligible deformation of the crystal lattice. “The observed invariance of the crystal lattice parameters upon the bi-intercalation makes these materials interesting also for applications in electrochemistry,” says Alexey Shkvarin of the Institute of Metal Physics in Yekaterinburg. 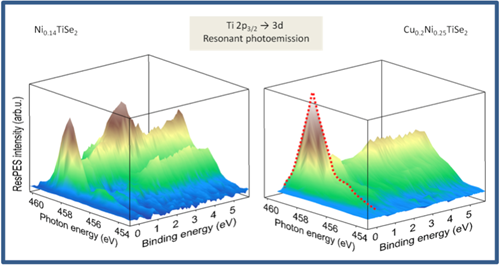 Alexander N. Titov graduated from the Faculty of Physics of the Ural State University (Sverdlovsk, Soviet Union) in 1982. After graduation, he worked at the Department of Solid State Physics, where he conducted research and synthesis of intercalate compounds based on titanium dichalcogenides. In 1992 he received a PhD in Physics and Mathematics with a thesis entitled "Electronic and Ionic Transport in the AgxTiS2 Intercalate Compound". In 2000 he moved to the X-ray spectroscopy laboratory of the Institute of Metal Physics, Ural Branch of the Russian Academy of Sciences. This has led to increased attention to the chemical bonds in intercalate materials. In 2006, Alexander Titov received his Doctor of Sciences (Physics and Mathematics) degree (analogue of Dr. Sci), with a thesis entitled: "Electronic effects in the thermodynamics of intercalate materials with a strong electron - lattice interaction." He has published more than 140 articles on the topic of synthesis and complex research of intercalate compounds.

Alexey S. Shkvarin obtained his Master’s degree in physics in 2001 at the Ural Technical University (nowadays Ural Federal University, Yekaterinburg, Russia) and a PhD in condensed matter physics in 2012 at the M.N. Miheev Institute of Metal Physics (Yekaterinburg, Russia), with a thesis on “Electronic structure of titanium diselenides doped with chromium, manganese and copper, according to X-ray and photoelectron spectroscopy”, performing his research work at Institute of Metal Physics. Since 2012, he is a senior scientist at the M.N. Miheev Institute of Metal Physics in the scientific group of Prof. A.N.Titov. He is engaged in the study of the electronic structure by experimental and computational methods and crystal structure of the layered transition metal dichalcogenides and their intercalation and substitution compounds.

Alexander I. Merentsov obtained his Master’s degree in physics in 2007 at the Ural State University (Yekaterinburg, Russia) and a PhD in condensed matter physics in 2014 at the Chelabinsk State University (Chelabinsk, Russia), with a thesis on “Crystal structure and physical properties of the solid solutions Cr(x)Ti(1-x)Ch(2) (Ch = S, Se, Te)”, performing his research work at the Ural State University (nowadays Ural Federal University) and Institute of Metal Physics. Since 2019, he is a senior scientist at the M.N. Miheev Institute of Metal Physics in the scientific group of Prof. A.N. Titov. He is engaged in the study of the electronic and crystal structure and physical properties of the layered transition metal dichalcogenides and their intercalation and substitution compounds.

Elena G. Shkvarina obtained her Master’s degree in physics at the Ural State University (USU), in 2007 and a PhD in Physics and Mathematics in 2014 at the Chelyabinsk State University, with a thesis on “Thermal stability of intercalated titanium diselenide FeXTiSe2 (x = 0 - 0.5).” Her scientific work has been performed at the M.N. Mikheev Institute of Metal Physics of the Ural Branch of the Russian Academy of Sciences (IMP UB RAS) in the group on Prof. Alexander N. Titov. Elena G. Shkvarina is an expert in X-ray diffraction, crystal structure analysis, and X-ray spectroscopy.