Researchers from the Fritz Haber Institute (Germany) observed an excitonic Mott transition in WSe2 by photoemission measurements at the free-electron laser FLASH (Germany).
Renormalization of W 4f core state due to presence of excitons and quasi-free carriers. Credit: FHI Berlin

Optoelectronic properties of semiconductors are largely governed by two types of excitations: excitons, the bosonic quasiparticles comprised of an electron and a hole bound by Coulomb interaction, and quasi-free carriers (QFCs) of single-particle character. The process of breaking excitons into QFCs, i.e. an excitonic Mott transition, has been quite elusive to observe due to its ultrafast nature.

“An exciton describes an electron and the hole it leaves behind when it moves from its original place,” explains Ernstorfer.

A novel approach of studying the interaction between core electrons and excited carriers has enabled distinguishing excitons from QFCs and tracking the evolution of an excitonic Mott transition on a femtosecond time scale using photoelectron spectroscopy. The free-electron laser FLASH enabled to simultaneously observe transient photoemission signal from core-levels up to conduction band which was instrumental in unravelling of the ultrafast Mott transition dynamics. Although the purpose of the research was purely fundamental, the intricate details of breaking excitons into QFCs might be helpful in designing more efficient solar cells. 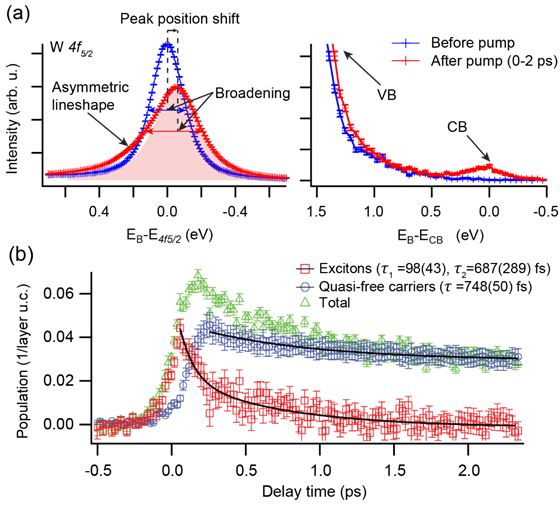 (a) Changes in the observed photoemission spectra due to the presence of excitons and QFCs. Usage of a free-electron laser enabled to simultaneously acquire photoemission intensity from core up to conduction states. (b) Ultrafast dynamics of excitons and QFCs obtained by analyzing the observed renormalization of W 4f core-level and conduction band population. Credit: American Physical Society.

Excitons are important in the process of producing electricity in solar panels. At the core of a photovoltaic cell, or what is more commonly called a solar panel, is a semiconductor (silicon for example) that on one side has many loose electrons and on the other more atoms with holes. Electricity is generated when a current runs between them, i.e. when the electrons move to fill the holes. But that process would be over in a few seconds without a new supply of electrons and holes. “The sunlight that shines on the photovoltaic cell prompts the creation of new excitons by lifting electrons to a new energy level,” says Ernstorfer, “where they leave a vacancy in their original states. That guarantees a constant supply of electrons and holes, thus enabling an electric current.”

“We wanted to know how excitons either break up or how they form from independent particles”, says Maciej Dendzik, lead author of the study.

An international collaboration of researchers around a team from the Fritz Haber Institute in Berlin now conceived a new approach for observing the generation of excitons in real time.

Distinguishing excitons from QFCs is not an easy task. The researchers took an unconventional approach to this problem by monitoring not only the excited states population, but also strongly bound electrons from the atomic core at the same time. The latter turned out to be essential for seeing the exciton breaking dynamics due to subtle changes in interaction strength as this process unfolds. This experiment resulted in development of a novel model describing how core electrons feel the presence of excitons, which paves the way for exciting new research in the field of semiconductor physics and, ultimately, the design of more efficient solar cells.

For this research, the NFFA Europe facility at the Consiglio Nazionale delle Ricerche – Istituto di Struttura della Materia, Rome (Italy) has been used to develop a theoretical model of the core-hole lineshape renormalization. 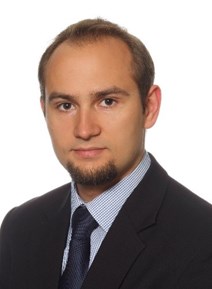 Dr. Dendzik obtained his PhD at the Aarhus University (Denmark) in 2017, under the supervision of Prof. Philip Hofmann. After a postdoc at the FHI Berlin (Germany), he moved to KTH Royal Institute of Technology in Stockholm (Sweden) as a permanent researcher to work on ultrafast electron dynamics in 2D materials. His research has been acknowledged with the Göran Gustafssons prize for young researchers in 2021. 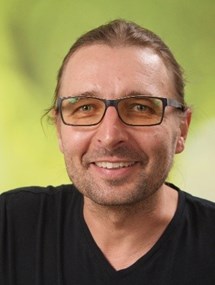 Prof. Ralph Ernstorfer is a professor in physics and heading the Ultrafast Nanoscience Group at the Technical University Berlin, Germany. In addition, he heads the Research Group Structural and Electronic Surface Dynamics at the Fritz Haber Institute in Berlin. After graduating in Physics at the Technical University Munich, he obtained a PhD in Physics at the FU Berlin in 2004 for the spectroscopic investigation of ultrafast electron transfer reactions. His experimental research at the University of Toronto (2005-2007) and at the Max Planck Institute for Quantum Optics and TU Munich (2007-2010) focused on structural and electron dynamics in condensed matter on femto- and attosecond time scales. His current research deals with ultrafast photoinduced phenomena in low-dimensional solids and at surfaces exhibiting strong correlations between atomic and electronic structures.